A presidential election campaign follows a set of familiar steps, from the early maneuvering and testing-the-waters activities in the pre-campaign period to frenetic last-ditch efforts of the party nominees in the fall.  Each presidential campaign occurs in, and is shaped by, a unique historical context.

Considering The Field of Play
Beyond the temperaments, leadership abilities, and characters of the candidates, one must also consider the context, or playing field on which a campaign is fought, for this sets broad bounds within which the candidates and their organizations must operate.  The historical context in which a campaign is waged impacts its substance, pushing various domestic and foreign issues into greater or lesser prominence.  Events, social and economic conditions, cultural tendencies, technology, and rules and laws governing the election process all combine to create a political landscape which may favor one or another of the candidates.

In "The Keys to the White House" Allan J. Lichtman, professor of history at The American University in Washington, D.C., identifies thirteen factors ("keys") which he argues determine whether the incumbent party will win or lose the White House.  Examples of the keys include the balance of seats in the House of Representatives, whether there is a contest for the incumbent party nomination, real per capita economic growth, and whether there has been a major military or foreign-policy success.

There are other contextual factors which merit consideration.  For example, the technologies a campaign can use to reach voters are constantly developing.  In the past, the whistlestop tour may have been the best way to communicate with voters; more recently the 30-second television spot has been the preferred currency, but the Internet is becoming increasingly important.  The number and type of news outlets, supplemented by bloggers, has exploded.  An Abraham Lincoln or a Theodore Roosevelt-type candidate might not be electable in such a communications environment.

To take another example, the conduct of federal elections is governed by rules set out in Title 11 of the Code of Federal Regulations (Federal Election Commission), state laws, and rules of the political parties.  These myriad rules have evolved over time and the net outcome is a system that seems more geared to lining the pockets of consultants than educating the voters.  It is long, expensive and often falls short in producing substantive discussion of issues.  The process for choosing the party nominees places a premium not on ideas or experience, but on the ability to raise money in the year before the election.  Thoughtful presidential prospects may choose to self-select out rather than enduring the grind.  Former House Speaker Newt Gingrich decried a lack of seriousnes in the political process during a "Lincoln at Cooper Union" dialogue held on Feb. 28, 2007.  "The process is decaying at a level that is bizarre, and it's a mutual synergistic decay between candidates, consultants and the news media," Gingrich said. (1)

The Clinton-Lewinsky scandal and the battle over Florida following the 2000 presidential campaign bolstered the notion that America has become a polarized nation, divided into "red" and "blue."  There was among many a yearning for an end to partisan bickering and gridlock.  In 2000 then Gov. George W. Bush campaigned as a "uniter, not a divider."  Again in 2008 there was an opening for a candidate who might be able transcend partisan politics and bring the country together. (2)  Unity'08, an effort to elect a bipartisan ticket to the White House in 2008, started in May 2006, but folded in January 2008.  In another example of the bipartisan thrust, in March 2007 former Senators Baker, Daschle, Dole, and Mitchell launched the Bipartisan Policy Center.  In recent decades, voters increasingly are chosing to register as independents or non-affiliated.  Third party and independent candidates might seem likely beneficiaries of this state of affairs, but they face numerous obstacles and the two-party system remains a fixture of American politics.

2008
The 2006 mid-term elections set the stage for 2008.  The messy situation in Iraq, Bush's sagging job approval ratings and perhaps some fatigue after six years of his administration, economic unease, high gas prices, and a few scandals in the mix caused Republicans to lose control of both the House and the Senate.

Iraq and the "war on terror" were significant issues early in the 2008 campaign, debated by Democrats in the primaries and used to effect by Sen. John McCain in his campaign for the Republican nomination.  There had not been any attacks on the United States since Sept. 11, but the war in Iraq, begun in March 2003, continued into its fifth year with costs and casualties seemingly far disproportionate to any benefits gained.

Many social and economic issues also loomed.  Former Speaker Gingrich, during the Feb. 2007 "Lincoln at Cooper Union" dialogue stated, "I believe this country today faces more parallel challenges simultaneously than at any time since the 1850s."  ("And," he added, "I believe there is a grave danger that our political system will not be capable of solving these problems before they take our society apart in ways that are very destructive.")  America continued to run up large trade deficits month after month.  The loss of manufacturing jobs was a particular concern as is the low household saving rate and retirement security.  Health care costs continued to spiral, and millions were without health care insurance.  Difficult choices loomed on Social Security and Medicare; the Congressional Budget Office projected that federal spending on Social Security, Medicare, and Medicaid would double by 2030. (2).  Sizable federal budget deficits produced a public debt that rose from $5.7 trillion when George W. Bush was sworn in the first time to $7.6 trillion at the time of his second Inauguration to $9.2 trillion at the time of the Iowa caucuses in Jan. 2008.  Hurricane Katrina revealed serious deficiencies in government response.  The emotional issue of illegal immigration remained unresolved.   Global warming received considerable attention due in large part to the efforts of former Vice President Al Gore.  Given this accumulation of issues, it is not surprising that President George W. Bush's job approval ratings hovered around 30-percent throughout the election year, creating a heavy burden for whichever candidate gained the Republican nomination.

Any one of the above issues could have moved to the fore in public discussion.  One issue that particularly hit home was the price of gasoline.  The cost of a gallon of regular gasoline crossed the $2.00 level in March 2005.  By the time of the Iowa caucuses in Jan. 2008 the price of a gallon of regular stood at about $3.08.  From March to there was a steady rise to a peak of about $4.05 in mid-July 2008. 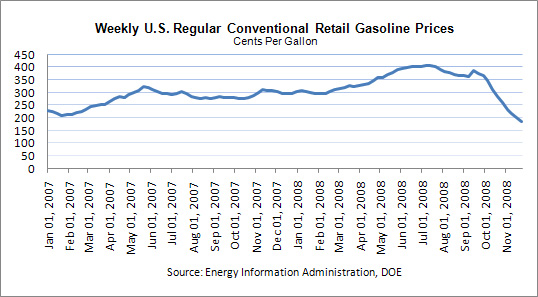 But it was the collapse of the housing bubble and the myriad ramifications of that collapse that ultimately had the most telling effect on the outcome of the 2008 election.  As the Office of Federal Housing Enterprise Oversight noted in its April 15, 2008 Report to Congress, "The weakness in the housing sector that began in 2006 got much worse in 2007.  While housing markets had been a source of strength for the economy during the economic expansion that began in 2001, by year-end 2007 housing threatened to lead the economy into recession."  Problems with the housing sector spread to financial markets.  A harbinger of the difficulties to come occurred in March 2008 when Bear Stearns collapsed and the Federal Reserve intervened.  By Sept. 2008 a full-scale economic crisis had developed, dominating the closing weeks of the election.  On Sept. 7 the federal government placed mortgage giants Fannie Mae and Freddie Mac into conservatorship.  Such was the seriousness of the situation that, even in the heat of the campaign, Congress managed to pass the Emergency Economic Stabilization Act of 2008, a $700 billion financial rescue/bailout bill, which President Bush signed into law on Oct. 3.  Major fluctuations roiled financial markets.  For example, the Dow Jones Industrial Average lost 777.68 points (6.98%) on Sept. 29, 678.91 points (7.33%) on Oct. 9, and 733.08 points (7.87%) on Oct. 15, while gaining 936.42 points (11.08%) on Oct. 13 and 889.35 points (10.88%) on Oct. 28; this volatility extended into the transition period.

Past Elections
-The 2004 election in essence was about national security.  The terrorist attacks on September 11, 2001 had burned into the national psyche.  Within a month anthrax letters spread further anxiety to the extent that people were afraid to open their mail.  Increased security led to a new set of realities including long lines at airports and unsightly barricades around some public buildings.  President George W. Bush's popularity soared with the successful prosecution of the war in Afghanistan; his job approval reached 92 percent in October 2001 and was still at 83 percent in late January 2002.  The focus shifted to Iraq, and by the summer months of 2002 there was much speculation in the press and political circles about a possible war to force a "regime change" in Iraq, and about what form such a war would take and when it would come.  On March 19, 2003, having failed to gain the backing of the U.N. Security Council, the United States, backed by a "coalition of the willing," launched a strike on a meeting of key leaders in Baghdad, thereby beginning the war with Iraq.  Democrats selected Sen. John Kerry as their nominee in significant part because he was a Vietnam veteran and was thus seen as someone who could speak with authority on national security.

-The event that most colored the political landscape in the 2000 cycle was the Clinton-Lewinsky scandal.  This sordid story dominated the news in the latter part of 1998, culminating in the U.S. Senate sitting as a Court of Impeachment in January 1999.  President Clinton survived, but the scandal set up a strong undercurrent which continued to resonate throughout the election cycle, creating a very awkward situation for Vice President Gore.

-In 1996, the Cold War had receded into people's memories, and the campaign was fought on domestic issues.  The debate over the Clinton administration's health care proposal, the Republicans' gain of control of the House in the 1994 mid-term elections, and the unprecedented shutdowns of the federal government all set the stage for the 1996 campaign.

-The context of the 1992 campaign can best be summed up in the slogan, "It's the economy, stupid."

Conclusion
The issue terrain shifted markedly during the course of the 2008 campaign.  First it appeared that Iraq might be the dominant issue, then energy.  Meanwhile, there were many grounds for concern about the American economy lurking in the background.  In Sept. 2008 major cracks appeared in the financial system and the economy moved squarely to the front and center of the debate.

Notes
1. More from Gingrich: "...we live in an age of webcasts, which we're doing tonight, we live in an age of television, 24-hour radio, dramatic ability to reach the country immediately, and the campaigns instead of getting shorter have gotten longer.  And there's a practical reason.  They're consultant full-employment processes.  The first delegates are filed at the end of November and chosen in January and February.  There's no reason you have to be out doing all this junk, except candidates turn to consultants who say hire me now.  To hire me now you have to raise money, to raise money you have to hire a finance person, now you have to pay both me and the finance person so you better spend all your time going out and raising money, which is a totally banal process, the end of which means you have candidates who are totally exhausted, have no thoughts, but know an awful lot of rich people well."

2. Coincidentally the 2008 campaign saw a number of firsts.  On the Democratic side a woman, Sen. Hillary Rodham Clinton, an African-American, Sen. Barack Obama, and a Latino, Gov. Bill Richardson, waged credible campaigns, while a Morman, former Gov. Mitt Romney, strongly contested the Republican nomination.  Might one of these candidates be able to take advantage of the political terrain?

Other
C-SPAN's American Presidents: Life Portraits
Why Not A Woman?
Allan J. Lichtman  (2004 article on The Keys to the White House)  (brief June 2006 interview)