"Granite Staters are tough but fair with those who would be President.  Toward the end of the race, when the temperature gets colder and the campaigning gets hotter, it takes dedication to survive.  Here is democracy at its best, for it takes more than a big bankroll or name recognition to impress us." --Nackey Loeb

The premise and the promise of New Hampshire's first in the nation primary is that it allows even little-known, underfunded candidates to have a chance at winning the White House.  By engaging in grassroots politics, visiting ordinary citizens in their living rooms and meeting them in diners, a candidate can gain favorable notice, attract support of activists, do well in the primary, and thereby gain momentum going into the rest of the nominating process.  Accordingly there is a lot of traffic by presidential prospects as they seek to connect with activists and potential supporters.  This activity starts several years in advance of the primary.  From after the 2004 election to the end of 2006, major Republican prospects made 59 visits totaling 76 days and major Democratic prospects made 61 visits totaling 94 days.  Potential candidates also started to line up supporters and build organizations through their leadership PACs.

Democratic tradition:  The General Court, New Hampshire's "citizen legislature," consists
of the 400-member House and 24-member Senate.  The House is the largest state legislative
body in the United States.  Legislators receive a salary of $200 per biennium.
New Hampshire activists take their politics very seriously.  Over the decades, the New Hampshire primary has produced many memorable scenes, and each succeeding primary reinforces the proud tradition.  Inded the primary's first in the nation status is enshrined in state law.  The primary and all the comings and goings also provide a tremendous economic boost to the state.

Critics argue that New Hampshire is not representative and should not be granted a privileged position.  The Democratic National Committee, after a lengthy process that started following the 2004 campaign and ran through August 2006, decided to add two additional early contests to its 2008 presidential nominating calendar.  Democrats planned to start with the Iowa caucuses on January 14, followed by January caucuses in Nevada, then the New Hampshire primary on January 22, and finally the South Carolina primary, all before the February 5 opening of the window when all the other states can hold their contests.  New Hampshire political leaders mounted a spirited defense of the first-in-the-nation primary throughout the Democrats' deliberations, but were unable to forestall the changes.

The Democrats' plan, however, fell by the wayside.  New Hampshire Secretary of State Bill Gardner had the final say as to the date of the primary and he was bound and determined to protect the state's first in the nation status.  In a July 20, 2006 letter to members of the DNC Rules and Bylaws Committee, New Hampshire Gov. John Lynch wrote of Gardner, "You should assume that he will move up New Hampshire’s primary date, perhaps even ahead of Iowa, if he determines it is necessary to uphold New Hampshire law."  Gov. Lynch, in an August 19, 2006 press release, announced that he had "received written commitments from 10 potential Democratic presidential candidates that they will participate in the New Hampshire primary on whatever date the Secretary of State sets."  Gardner was most concerned about Michigan's January 15, 2008 primary, and he kept everyone guessing until Thanksgiving eve, November 21, 2007, when he announced January 8, 2008 as the date. 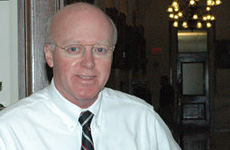 Independents Form an Important Voting Bloc
In the 2000 New Hampshire Primary Sen. John McCain defeated then Gov. George W. Bush with significant support from independent voters.  Undeclared voters can vote in either party's primary.  The procedure is simple.  Upon entering the polling place, a voter declares for one of the parties and votes on that party's ballot; after voting he or she can return to the undeclared status.  Undeclared or independent voters form a significant voting group.  As of Jan. 8, 2008 the voting lists showed 271,220 Republicans, 258,776 Democrats and 355,498 Undeclared for a total of 885,494 (61,712 registered on primary day).

New Hampshire Visits by the Major Democratic and Republican Candidates

Visits that extend from one month to the next are tallied as 1/2 a visit in each month so as not to double count (see the calendars).  2005-06
Does not include John Cox (R) and Mike Gravel (D).

Lining Up Squarely Behind New Hampshire