Washington, DC - The Democratic National Committee today launched a new website, www.TheNextCheney.com that illustrates the most important thing the voters need to know about each of John McCain's potential vice presidential picks: no matter who he chooses, any ticket with John McCain on it means more of the same.  As McCain himself said in 2001, "with a little more luck" he'd have asked Dick Cheney to be his vice president. The new site, www.thenextcheney.com, features an initial list of seven contenders poised to be the next Cheney.

The initial launch of the site features basic information on the seven individuals McCain is rumored to be choosing from, with profiles of Eric Cantor, Charlie Crist, Carly Fiorina, Tim Pawlenty, Mitt Romney, Fred Smith and John Thune.   The site will also gives voters an opportunity to sign up to volunteer to be a part of the rapid response efforts in their communities.

"After lamenting the missed opportunity to make Dick Cheney his own Vice President in 2001, McCain will have a chance to choose his very own Cheney, said DNC spokesman Brad Woodhouse. "We think it's important that the American people have all the facts at their fingertips when it comes to John McCain and his vice presidential pick. This site gives reporters, voters and activists a chance to review the record and see for themselves that, no matter who he picks, a McCain ticket means more of the same for families already struggling to pay out of control energy costs, keep their jobs and stay in their homes."

The new www.TheNextCheney.com site is extension of the DNC's efforts to outline the real records of all the Republican candidates, going back to the first days of the primary season.  In the coming days, the site will be updated with additional content and functionality, including new videos and information about additional potential vice presidential candidates. 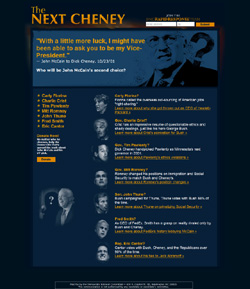